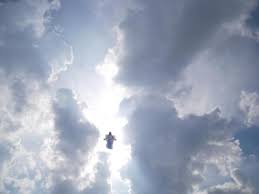 Delayed (but certainly not denied) complements of the New Year to you!

I have entered this year embracing specific promises that God has granted me.  I’ve entered into a brand new year fully replete with brand new blessings, breakthroughs, and fresh new promises.  As I embrace this abundant favor He is extending to me, I’m reminded of a word my dear friend Lydia, a radio presenter and powerful woman of God, recently sent me that ministered to me in more ways I could ever imagine.

She said, “I see the heavenly assembly looking down on you. I see the Father on His throne and Jesus sitting at His right hand. There is silence as they listen to your heart. I see a host of angels surrounding you looking attentively waiting for you to speak. The look in their eyes says, “We are ready! We are with you! Command us!”

Wow! There were so many nuggets thrown in this word that my mind was completely blown away.  But one portion resonated so deep within my spirit that I felt it necessary to revisit.  As she spoke of Jesus sitting at the right hand of the Father, while there was in silence
in heaven, I reflected on my study of the book of Revelation.

When the Lamb opened the seventh seal, there was silence in heaven for about half an hour. (Revelation 8:1)

Immediately after this seal was opened, the prayers of saints were offered to God which ushered in the seven trumpet judgments of God.[1]  This would mark the beginning of God’s wrath being poured out on all who oppose Him.  It sets the stage for Jesus to “stand up” and avenge the blood of His people.

I pondered that silence in heaven that took place just before the release of judgment. It caused me to draw from this analogy:  A group of school kids just discovered that they had been caught misbehaving terribly.  They knew they were in great trouble, but they had no idea what their punishment would be.  They discussed their potential fate until they heard the doorknob turning as the teacher, principle, and those affected by the behavior of these children entered the room.  From that moment until the teacher decided to speak, you could hear a pin drop.  Total silence in anticipation of impending doom filled the room.

Of course, fear gripped the perpetrators.  But even the victims who knew well the wrath that the principle embraced found themselves utterly speechless as they awaited the soon coming passing of judgment.

Likewise, I can only imagine the angels in heaven, who have basked in the loving kindness of their Creator since the beginning of creation, standing back in stunned silence as they await the unleashing of His wrath.

IS HE STILL SITTING?

This brings me to the next part of the word that resonated in my spirit.  Jesus was sitting at the right hand of the Father, but what was His response to the prayers and cries of His people today?  This takes me backs to the post entitled “And Jesus Stood Up” published back in October, most of which bears repeating here.

As I read the book of Acts, I was reminded of a powerful message preached by Iona Locke in the 80s entitled “And Satan Stood Up”. Her text was taken from 1 Chronicles 21:1 which says, “And satan stood up against Israel, and provoked David to number Israel.”  David was influenced by the devil to act in complete disobedience to God’s command which resulted in severe consequences.  70,000 men died as a result of this disobedience.[2]

As I read the account of the stoning of Stephen[3], I’m sure it was again the result of satan standing up.  Satan, feeling threatened by the wondrous works wrought at the hands of Stephen for his role in building of the Kingdom of God stood to influence certain Jews in the synagogue to conspire against him and ultimately have him killed.

Satan stood again, but so did Jesus!  He decided to stand toe-to-toe with this notorious Kingdom killer.  But just like in a chess match, sometimes a pawn chooses to be sacrificed for the greater good of the kingdom.  Stephen choose become a martyr for the sake of the gospel which set the stage for Jesus to stand and strike the blow that would knock the devil silly!

In his darkest hour, Stephen was so blessed to witness Jesus stand up from his throne located strategically at the right hand of God.[4]  As He stood, He welcomed Stephen into life everlasting.  But what caused Him to stand?  After all, he had been sitting comfortably at God’s right hand since He had been raised from the dead, not long prior to this occasion.[5]

I can picture Jesus watching broken-hearted as his disciple stood against His antagonists and preached Him crucified.  While His heart ached, I’m sure He was so moved to see one of the first of His followers display a willingness to get to know Him “in the fellowship of His suffering”[6].  But was that enough to cause him to stand?   Could he have stood in grief at the treatment of His Body[7], as Stephen practically echoes the very speech He uttered on the cross?[8]

This reminds me of my childhood days.  When someone would hear that a sibling was about to be bullied, he would arrive on the scene and stand by, ready to take on the bully himself if necessary.  I’m sure Jesus felt just like that sibling, ready to stand in front of Stephen and conquer that old bully.  While he didn’t stop the fight, He did Stand up!

He knew full well that the ultimate victory over this Disciple killer would require Him to stand up, and go toe-to-toe with this adversary strategically.  That’s exactly what He did.  He stood to receive this sacrifice, and to protect His investment. He stood to protect His Body.

As Saul, notorious for tormenting Christians,[9] was headed to Damascus to further his crusade, Jesus stopped him dead in his tracks for the great confrontation that led to the great conversion.[10]  Today, 2/3rd of the New Testament was authored by this former Kingdom killer, all because Jesus Stood up.  He stood up, and He showed up!!!

Isn’t it amazing how far the gospel has spread in the last 2000 years?  And thanks to today’s technology, it’s spreading even further throughout the globe.  All because Jesus Stood up.

Conversely, when I reflect on certain tragic and trying events in my own life, and how I was delivered unscathed, I’m convinced that Jesus stood up.  I have some battle scars remaining from some wars I’ve engaged in, yet I’m healed because I know He stood up.  Just as He stood up for Stephen, and just as He stood against Saul, just trust that He’s standing up for you.

Thank You Lord for YET standing for me.

One thought on “AND HE YET STANDS!”